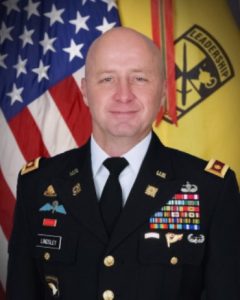 LTC Jon Lindsley was born in Hattiesburg, Mississippi and enlisted in the Mississippi Army National Guard in January of 1994. During his enlistment he held numerous support positions at Camp Shelby while simultaneously serving as a Department of Defense technician.  He is a graduate of the University of Southern Mississippi where he commissioned, and was branch detailed as an active duty Air Defense officer. His first duty assignment was with the 4th Infantry Division at Fort Hood, Texas where he served as an Avenger platoon leader and maintenance company executive officer in 1st Battalion, 44th Air Defense Artillery Regiment. He then completed the Transportation Officer Qualification Course and deployed with Military Transition Team to Operation IRAQI FREEDOM 07-08 serving as the Logistics Advisor to an Iraqi Tank Battalion.

Following the Logistics Officer Advanced Course, LTC Lindsley served as the B Company Commander in 3rd Battalion, 47th Infantry Brigade at Fort Benning, Georgia.  After company command, LTC Lindsley was assigned to the 10th Special Forces Group (SFG) (Airborne) at Fort Carson, Colorado as the Group Support Battalion Operations Officer. He then served as the 3rd Battalion Logistics Officer with the Advanced Operating Base in support of Operation OBSERVANT COMPASS and then deployed again as the Special Operations Task Force-Horn of Africa J4 in support of Operation ENDURING FREEDOM. After his return he was assigned as the Deputy Support Operations Officer and subsequently deployed to Operation ENDURING FREEDOM 13-14 with the Combined Joint Special Task Force – Afghanistan as the J4 Director. He then returned to home station and served as the 10th SFG (A) Support Operations Officer and the Group Logistics Officer.

After completing the Air Command and General Staff College, LTC Lindsley was assigned to Fort Campbell, Kentucky where he served as the executive officer of 626th Brigade Support Battalion for the 3rd Brigade Combat Team, 101st Airborne Division (Air Assault), and as the Support Operations Officer during Operations RESOLUTE SUPPORT and FREEDOM’S SENTINEL 16-17.

LTC Lindsley is a graduate of the University of Southern Mississippi where he earned his Bachelor of Arts in Psychology with a minor in Military Science. He also completed the Air Command and General Staff College where he earned his Master’s in Military Operational Arts and Science. He is published in a co-authored article, Counter-Lord’s Resistance Army: Logistics in Central Africa, in the January-March 2013 edition of the Special Warfare Journal, and in multiple contributions the Joint Multinational Readiness Training Center provided to the Center for Army Lessons Learned.

LTC Lindsley and his wife, Amanda, are the proud parents of three sons, Asaiah, Kaden, and Jaxson.