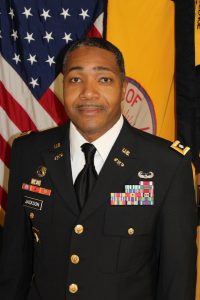 LTC Vincent Jackson was born in Landstuhl, Germany and his hometown is Miami, FL. He received his commission as a Chemical Officer from Florida International University in April 2002. He holds a Doctor of Education Degree in Organizational Change and Leadership from the University of Southern California, a Master of Science Degree in Athletics Administration and Coaching from Western Kentucky University, a Master of Arts Degree in Museum Studies from the University of Oklahoma and a Bachelor of Science Degree in Mass Communications from Towson University.