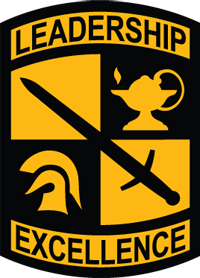 Cadet Commands shoulder patch was authorized 8 April 1986. The shield symbolizes the Army’s mission of national defense and is divided into quarters representing the four traditional military science courses compromising the senior ROTC curriculum. The sword signifies the courage, gallantry and self-sacrifice intrinsic to the profession of arms. The lamp denotes the pursuit of knowledge, higher learning, and the partnership of Army ROTC with American colleges and universities. The Greek helmet is symbolic of the ancient civilization concept of the warrior-scholar. The motto “Leadership Excellence” expresses the ultimate responsibility of Army ROTC in the discharge of its moral responsibility to the Nation.